So long taboo topics and hello to solutions: GTG, PMS is a powerful blend of botanical extracts to support women’s natural hormone cycles throughout the month. It goes beyond supporting relief from painful symptoms of PMS including bloating, cramping, restlessness, irritability, anxiousness, hot flashes and mood swings. While maintain a healthy hormonal balance, it also reduces hormonal acne and lack of energy.

Vitamin B6
Vitamin B6 has been shown to reduce a broad range of PMS symptoms, but one of the more notable ones is premenstrual depression. “Sorry for what I said when I was PMSing” becomes a thing of the past. Any woman who’s ever experienced PMS (that’d be >90% of us, BTW) knows that it rarely feels like just one thing. Just sad? We wish it was that easy. More often than not, it’s a jumbled up combination of a lot of hard-to-describe symptoms. And it’s in those cases, when you’re up against a ton of “can’t-quite-put-your-finger-on-it” feelings, that your girl vitamin B6 has your back. *Traditionally used to alleviate: Mood Swings, Cravings

Chasteberry
Chasteberry is a coveted little fruit that can help dial down irritability and mood swings. A small-yet-mighty berry that’s been shown to decrease symptoms of PMS in up to 93% of women. One study concluded that chaste berry extract eases premenstrual mastodynia (AKA pre-period boob pain). *Traditionally used to alleviate: Hormonal Acne, Mood Swings.

Dong Quai
Dong Quai is an antispasmodic (which is a fancy way of saying it relieves cramps), balances estrogen levels, and supports your nervous system to ease anxiety and boost energy. Dong Quai also contains ferulic acid, a natural anti-spasmodic and anti-inflammatory that can help to further relieve PMS symptoms like bloating and muscle pain. Less cramps = less feeling like an energy-zapped zombie when that time of the month rolls around. *Traditionally used to alleviate: Cramps, Bloating.

Lemon Balm
When life gives you lemon balm, make PMS vitamins. In 2015, one study found lemon balm to be effective at reducing the intensity of PMS cramps among a group of 100 participants. A separate study conducted in 2014 researched the anti-stress effects of lemon balm; those participants who were given lemon balm reported improvements in mood and cognitive performance. Not sure about you, but when that time of the month rolls around we want all the mood boosting benefits we can get. *Traditionally used to alleviate: Cramps, Digestions, Stress.

Chew 1-2 gummies as needed, preferably after a meal in the morning or as directed by a healthcare professional.

Delicious nutrition you can trust! 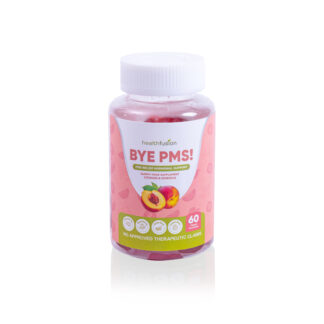